Home Division Jammu Hindus & Muslims pledged that they will never be in confrontation with... 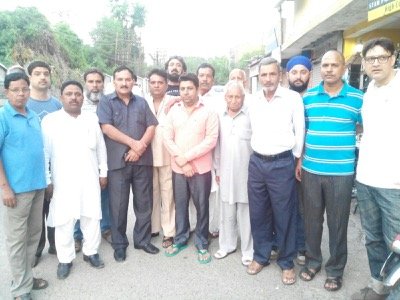 In the backdrop of the growing incidents of violence and the disharmony being allegedly created by the politicians for the petty gains, people from ordinary walks of life gathered at high court road, old janipur, jammu.

The small gesture and the gathering comprising of both hindus and muslims, decried the politics which created a wedge between hindus and mulsims and between religion per se.

The Hindus and Muslims of Jammu want to send a tough message to these politicians that all prospects of creating a deliberate divide between them will miserably fail as both the communiities have understood their game plan and have made up their minds not fall in the trap.

Hindus and muslims have peldged that they will never be in confrontation with each other . The gathering at this vitiated atmosphere is a proof that all the attempts of politicians will be stone walled.

This garthering has also appealed to the people of the other localities of J&K to form similar meetings and this small gesture will be a big message to the politicians to dissuade them from dividing us on religious lines. People of Jammu should make it clear and leave no room of doubt that hindu muslim unity is a reality and it will grow stronger with the passage of time.

The message from people of j&k is required to be sent loud and clear to these politicians that instead of finding ways and means to divide us they should endevour ot bridge the gap and clear the misunderstandings.

Bothe hindus and muslims of Jammu have lived like brothers and are not interested in the politics based upon hatred . People want that country and state should run according to the constitution and mandate of law.

The message which is meant to be disseminated throughout is that hindus and muslims will live like brothers in peace and brotherhood.