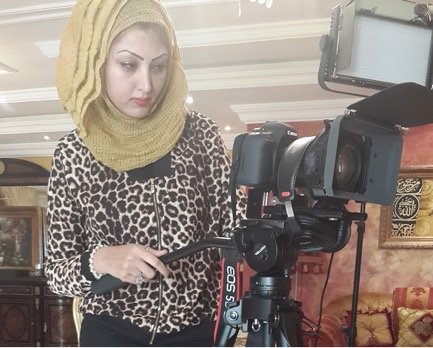 The Jeddah based Saudi citizen Sameera Aziz, a female Journalist, film maker, director, writer, radio presenter, novelist, speaker, social worker and activist, has now entered in Bollywood. She is directing her movie ‘Reem’ under the banner of her own first Saudi production house in Bollywood ‘Sana Solkar Production’. Her film Reem is the first Saudi-Bollywood venture in India.

The story of the film Reem is based on true story written by Sameera Aziz herself. This is a story of a Saudi girl, Reem; whose mother is an Indian woman. After getting the divorce from Reem’s Saudi father, she returned to Mumbai, India – leaving her 8-month-old daughter Reem with her Saudi father and Saudi step mother in Jeddah. Reem has been living a happy life with her agnate siblings. In fact, one of her younger brothers is her good friend and she shares every secret with him. He supports the right of Reem to make her own choices.

One day, after her graduation, it coincidently revealed to Reem that her real mother was an Indian woman. Reem gets surprised and mystified. Now she wants to know her genuine identity. She becomes curious to know about her real mother. Postponing her marriage, Reem goes to India. Will she find her mother? What kind of struggle she will do in India to reach to her mother? She does not know that she has a sister as well in India. She will also find her ‘Mr. Right’ in India, but both ignore each other. He realizes his deep feelings for Reem only after her departure to Saudi Arabia. She returns to Jeddah just to obey her father’s order. Now in this situation, Reem’s marriage with her love will be possible?

The twist and turns in the film makes it an interesting entertaining family drama with the exposure of modern days developed Saudi culture and tourism. The lively Indian youth and their adventures will add the spice in the film. There are fighting scenes, melodious songs and comedy scenes in the film to entertain the audience.

“I will take a good advantage to present the beautiful and positive things, happening and amazing locations of my city of lights ‘Jeddah’. My Jeddah is full with landmark locations, historical places and best infrastructure. Bollywood has explored Dubai, Egypt as well as many other Arab countries. It is only Saudi Arabia, which is not being explored yet,” said Sameera Aziz.

Speaking about her goal and reason to write and direct this film, Sameera Aziz says that film is an animation of person’s imagination. The writer can powerfully convey his ideas to his viewers by directing his film. “For developing the better understanding, we should interact with the world and reach to the people by communicating with them in their language. Therefore, with the mission of peace and love, and to present myself as a bridge between Saudi Arabia and the rest of the world, I aimed to enter in the Bollywood industry with a new, decent and powerful story,” mentioned Sameera Aziz.

The target of Sameera Aziz by making this film is to present a modern and educated Saudi youth to show the world that the new generation of Saudis are not harsh and ignorant people. “We are not among those people who have spread the hatred by their terrorism acts. We are not abusers; we do love others; we do care others…. Our young Saudi generation is decent, confident, humble and highly educated. They have a sense to be socialized and to protect their values and identity at the same time,” she told.

Sameera Aziz has studied and learnt film making from the Hollywood directors and has already assisted many directors of Saudi movies and plays such as Lamar and Hayath to name a few. She is into Journalism since 15-yrs. “I know very well how to present the scenarios. I am the first Saudi novelist of Urdu language in Saudi Arabia. So, I have been working hard and using all my abilities for my film. People want to know about the Saudi woman. Their curiosity will be useful for this film. Saudi women are always being portrayed as a victim of social norms. Let the world know that our heroine ‘Reem’ – a Saudi woman of today – gets the liberty to find her identity. Let the world know about the real life style of today’s Saudi women,” she said.

“Being a Saudi lady journalist, radio presenter and film maker, I too have been getting lots of attention. I am sure that people will like to see that what I am going to present them in an entertaining film with the new story and locations,” she added.

Sameera Aziz informed that her Hindi film Reem will be dubbed in Arabic and English languages and it will be released worldwide including Pakistan. “The script and storyline are very powerful and communicative. The expected heroine for the main role is Wiam Dahmani, a Moroccan actress from UAE. Music directors are Toshi-Sharib. Background music will be created by Sanjoy Chowdhary. The creative team of my production house is very experienced, qualified, hardworking and professional from Bollywood film industry. We did not finalize the cast from Bollywood yet. But it’s first time that Saudi actors are acting in a Bollywood movie and they will deliver the dialogues in ‘Hindi’ without dubbing. Those Saudi actors are: model and host of Coke Studio Hamza Iskander, famous veteran actor Muhammad Bakhsh, Nosheen Waseem, Ahmed Eskander, Abdul Majeed Saud and Salem Bawazeer,” She concluded.